Over the last 12 months or so when it comes to running any kind of business things have been, how should I put it, challenging to say the least!

During the various lockdowns, I have had the good fortune to be able to leave our house and go to my other kitchen, in a converted barn that is located on the other side of our village. This is where we run our catering business, and have done so for almost 25 years.

The reason for going there has been that, although the catering side of the business had more or less ground to a halt, around 18 months ago my husband and I decided to start up a new business called Lil’ Miggins.

We noticed over the last few years we had been getting more and more requests for gluten, dairy free and also vegan cakes and biscuits and decided to start experimenting. The idea being that they should taste as good, if not better, than regular cakes and can be enjoyed by all, not just those with dietary intolerances.

Lockdown was the perfect opportunity to go to work on my own, put the radio on and start experimenting with new recipes and flavour combinations. There was a fair bit of trial and error involved as you have to rethink entirely the way you approach baking with gluten free, dairy free and vegan ingredients.

I have to admit that there were some interesting and downright dreadful results! I discovered a lemon cake with an entirely new texture, somewhere between latex and play dough!

But I felt that ‘nothing ventured, nothing gained’, and after many hours, the hard work paid off and we had some really delicious results.

When we started selling online we were both surprised and delighted with the feedback and decided to promote and build up the business, ready to move forward when we eventually come out of lockdown

As for the curious name let me explain….

Almost two years ago I had an accident that resulted in me losing both my sense of taste and my sense of smell. As I have been a chef for more than 40 years, you can imagine I was, to say the least, devastated.

I was unable to drive for seven months and so I was effectively confined to barracks. During this time my husband brought home a tiny kitten that had been abandoned and we gave her a home at a time I had to be at home, and she followed me around everywhere I went.

She weighed 500g and originally she was called Lilbit, with Miggins as a nickname. Gradually, I became better and, thank goodness, my smell and taste started to return and we decided to name the new business after the cat – hence Lil’ Miggins!

Lil’ Miggins includes preserves, cakes and cookies. Also look out for Deborah’s book, Gathering, Tales of a Catering Family. She also runs her own outside catering company, Deborah Steward. 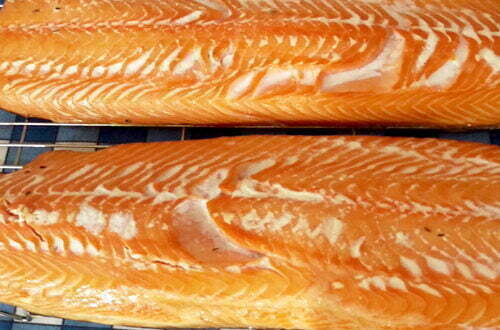